San Diego February events Conveniently located right in the hub of the vibrant Gaslamp Quarter, Oxford is a destination-worthy club with an awesome ambiance, killer cocktail menu, and an impressive entertainment roster.

We regularly host events in our space, including sets from local and national DJs and some of the most creative parties around.

Our goal is to offer not just a place to get a drink and hang out, but to offer a space where memories can be made.

Ready to experience what we’ve got to offer? Here’s what’s coming up on our calendar in February. 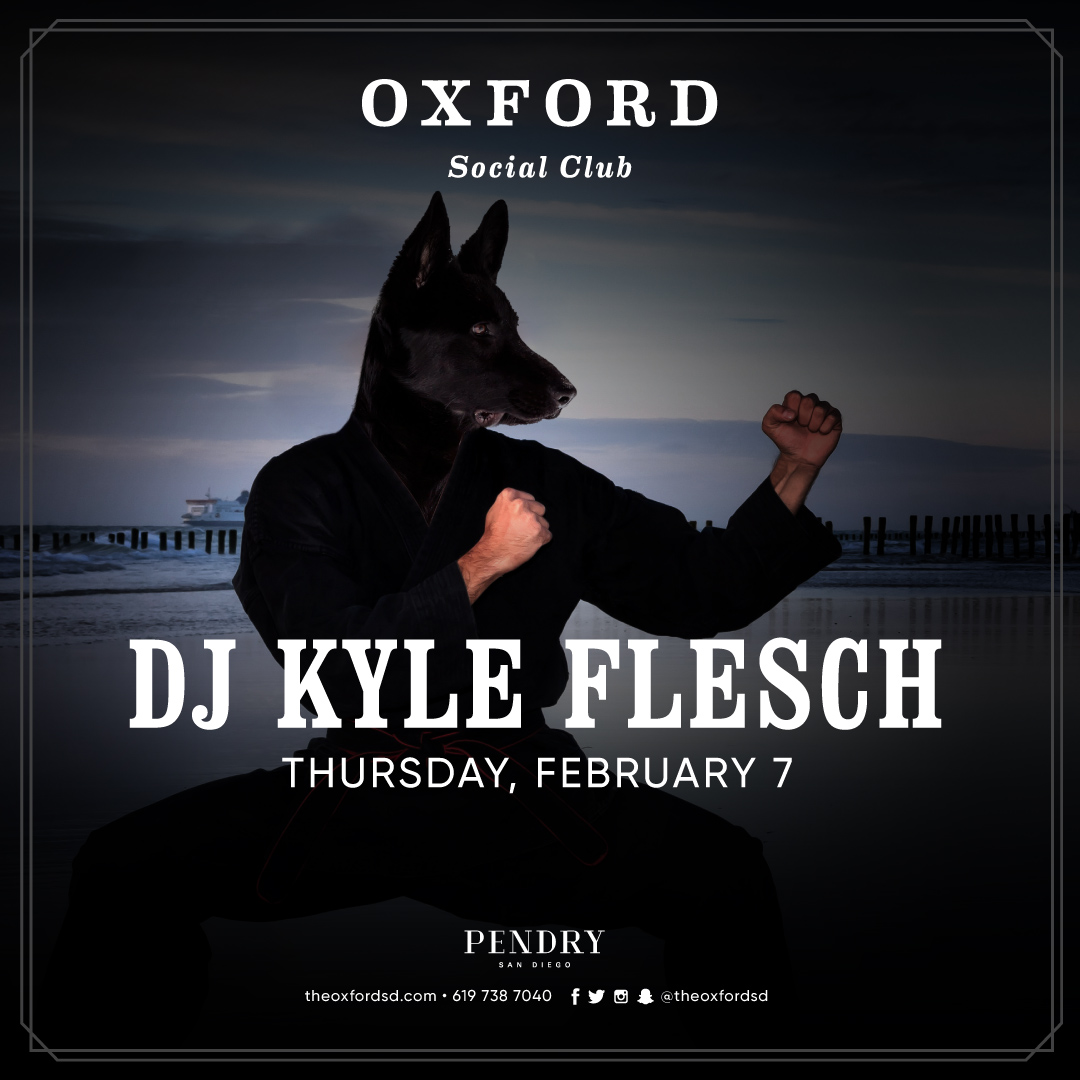 Originally from a small town in Montana, Kyle Flesch’s career kicked into high gear when he moved to San Diego. It’s in our sunny city that he began making his mark, starting with DJ sets along the beach and quickly graduating to residencies in the Gaslamp Quarter.

He’s played sets at musical events around the country, ranging from the Sundance Film Festival to the Playboy Mansion’s Leather and Lace party.

Known for his killer smile and intuitive sense of just what music to play to get the party started, Flesch’s sets are legendary in San Diego and beyond.

His sounds don’t just make you want to dance, but set the environment for the evening. You’ve got to experience his work for yourself to believe it! 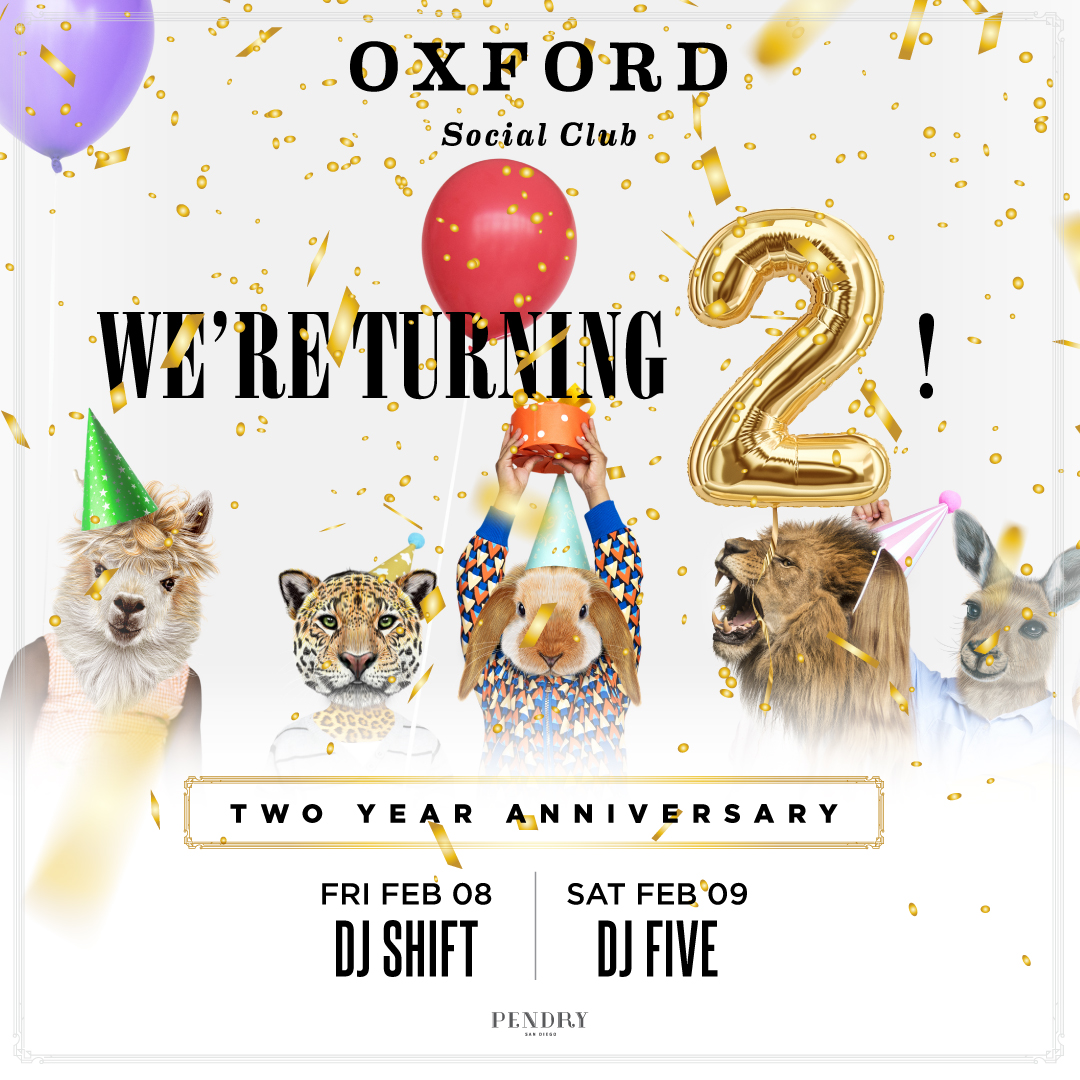 Oxford Social Club is gearing up for a big milestone: we’re turning two! To show our thanks to our loyal customers and community, we want to ring in another year of business with a big blowout.

Whether you’ve come to Oxford a hundred times or this is your first visit, this party simply can’t be missed! Here are the deets: 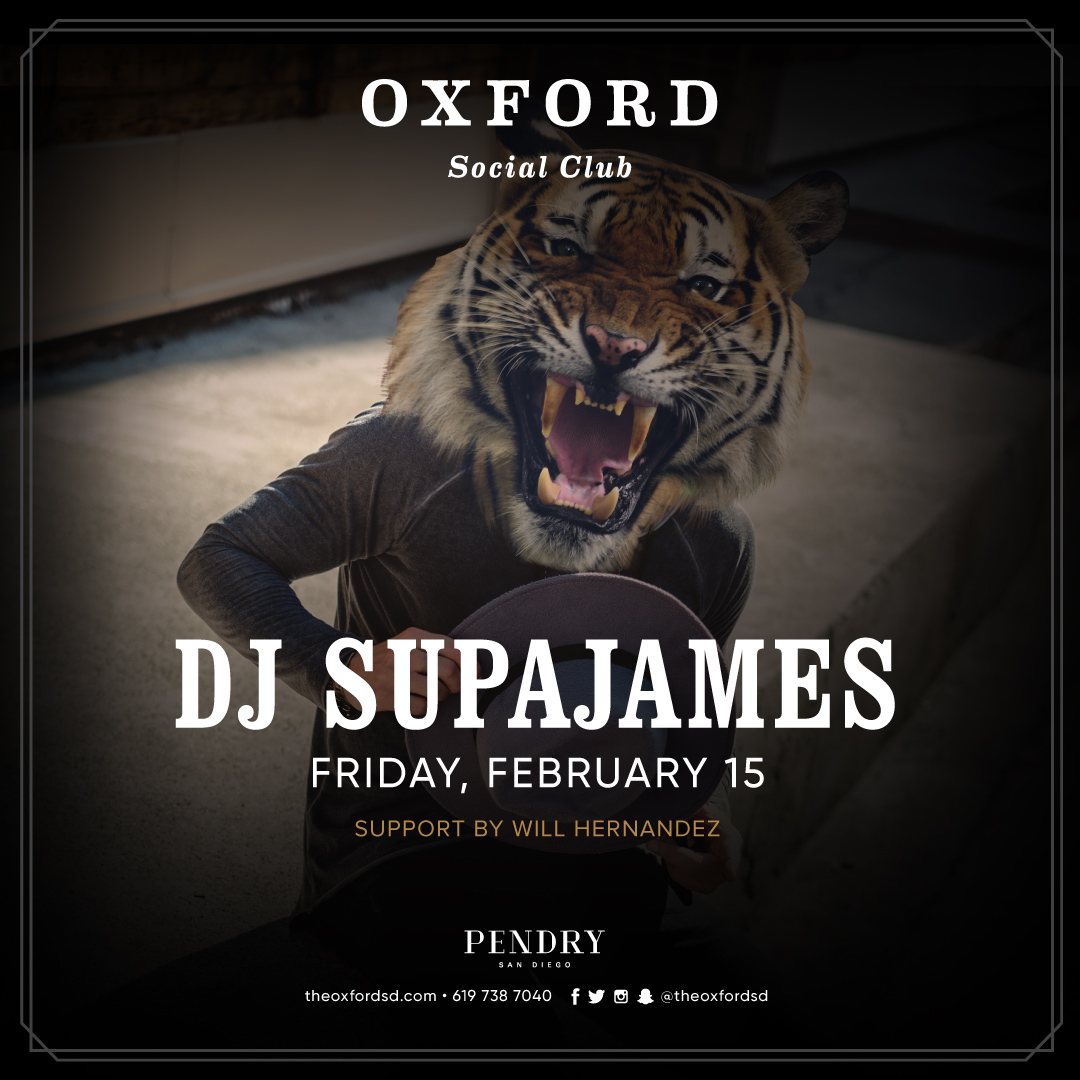 Ready for a super set of music? You won’t want to miss SupaJames. Originally from Palm Springs, SupaJames started his music career at the age of 15, acting as DJ on a local radio station. This led to live music sets, which took him to cities like San Diego and Las Vegas, where he’s really honed his skills and developed his entertaining style.

SupaJames’s mixes can be found on the radio on KREV in San Francisco, KFRH in Las Vegas, and KRCK in Palm Springs.

Whether it’s a radio show or a club gig, SupaJames brings it all the time, every time. Don’t miss this set at Oxford! 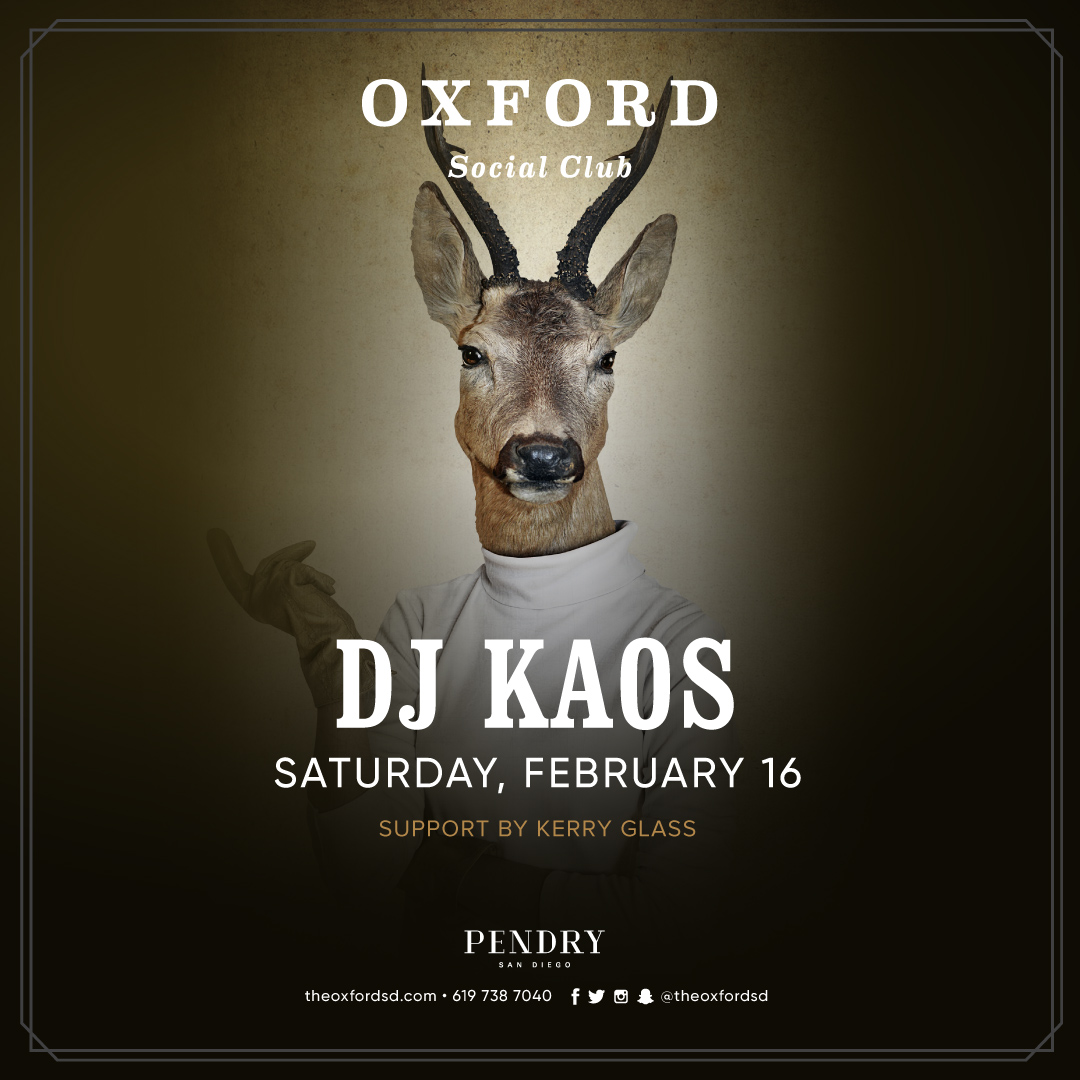 DJ Kaos is a San Diego who has always loved music. Local DJs were among his earliest influences, inspiring him to create his own sets and sounds.

He established a name for himself in San Diego, then expanded to become one of the most sought after DJs on the west coast and beyond. Known for his incredible work ethic, technical prowess, and creativity, he’s viewed as one of the most innovative DJs around, and was even awarded

You can catch him regularly spinning at elite clubs and venues across the country…don’t miss him this month at Oxford! 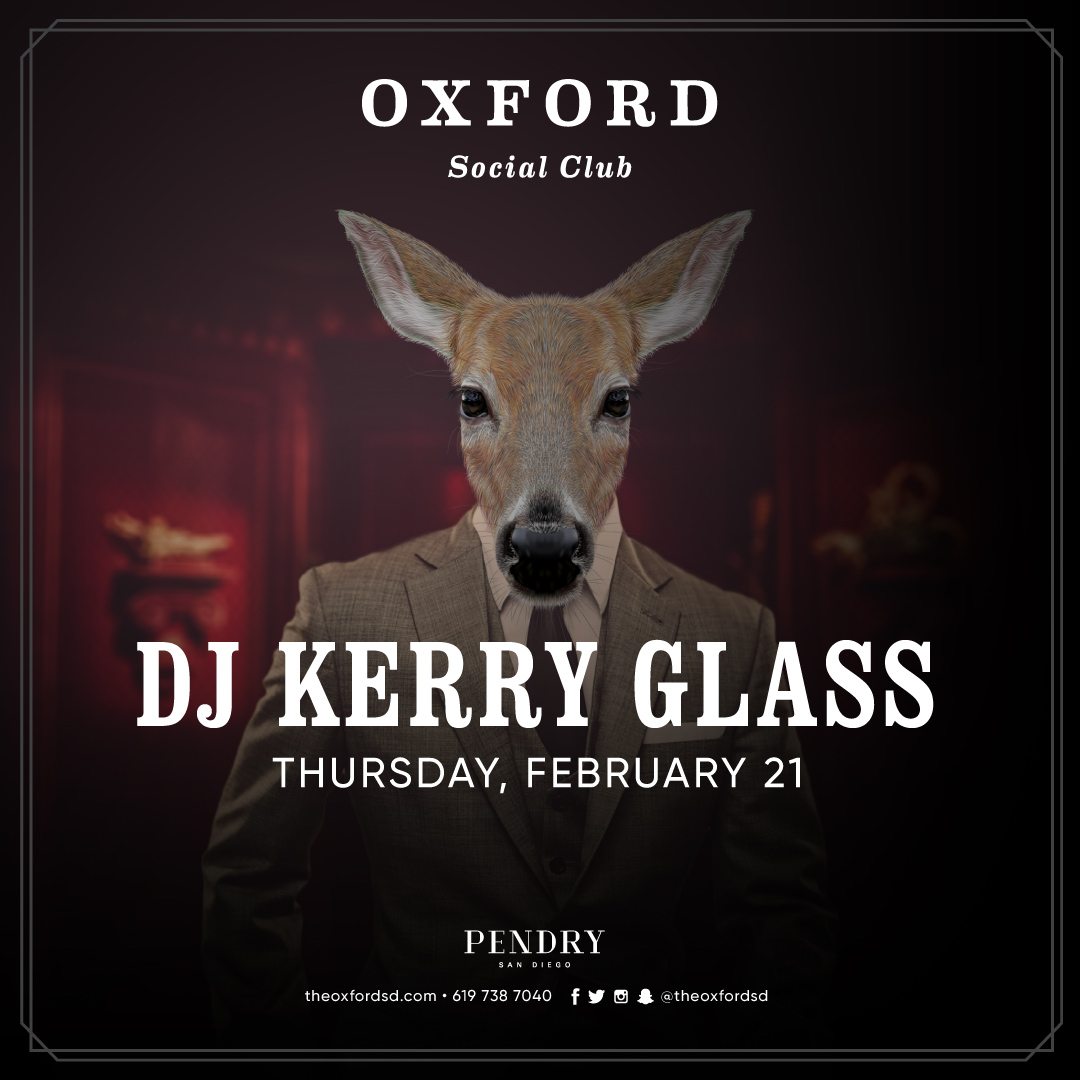 These days, it can be hard to set yourself apart as an open format DJ–there is so much competition! But Kerry Glass has done just that, with a versatile and well-practiced style that sets him apart from the rest.

Known for his ability to read the crowd and create a seamless mix that’s always just right, Glass combines elements of hip-hop, electronic and pop, and even 80s rock.

His unique style has made him in demand nationwide, and we’re lucky to welcome him at Oxford Social Club this month! 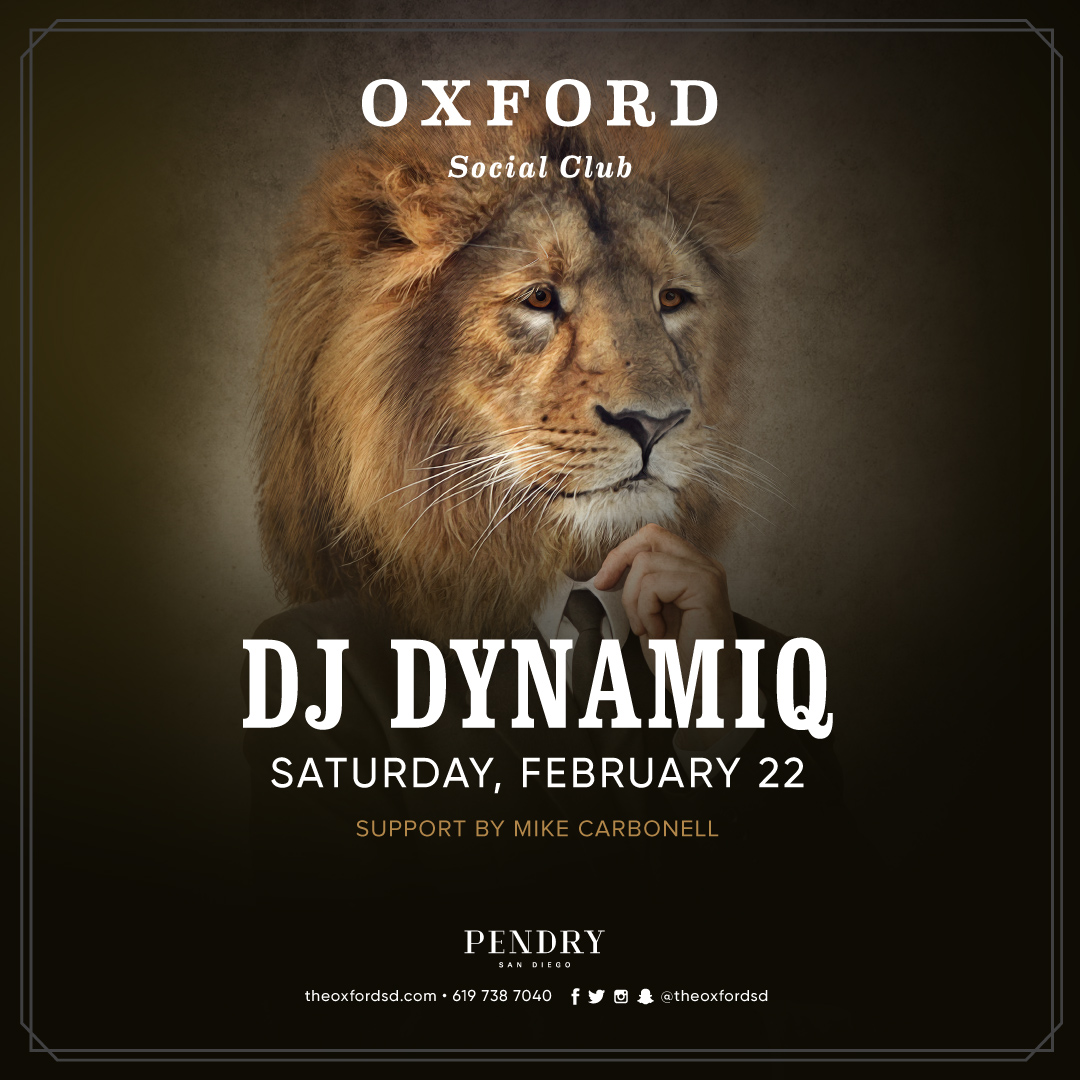 DJ Dynamiq is definitely a young talent to watch.

He has enjoyed some stratospheric growth in his career, with sets in Las Vegas, Los Angeles, San Francisco, Scottsdale, Chicago, and Miami; he’s also made international appearances in China, Singapore, Taiwan, the Philippines, and Mexico.

He’s nicknamed the “Open Format Assassin” with good reason: he has skills in EDM, Latin music, top 40, and much more. This really gives him the ability to put on an eclectic and fascinating show that is unlike anything else! Catch him at Oxford while you can. 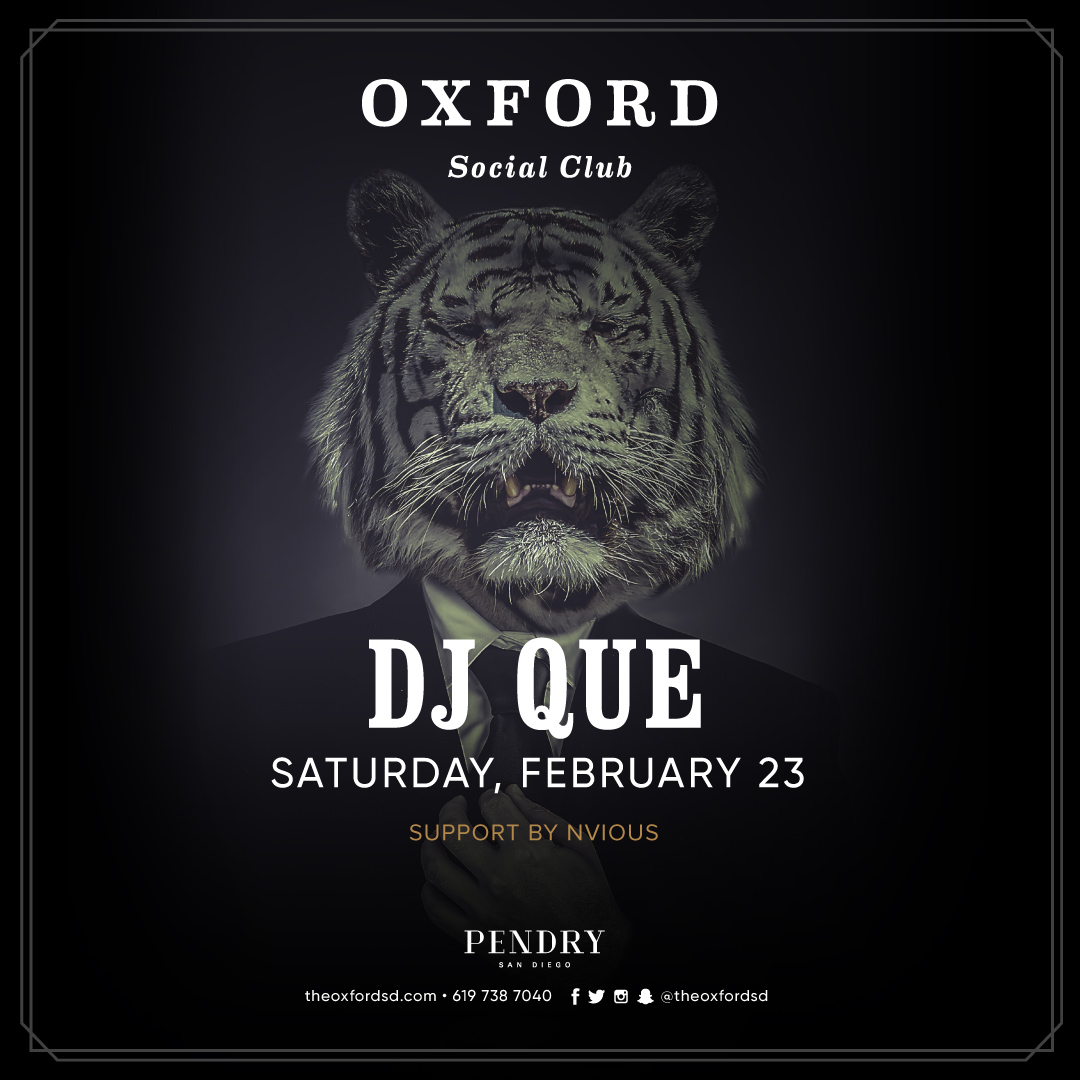 Born and raised in Las Vegas, QUE refined his art learning from some of the best DJs in the world in his hometown.

He’s known for his west coast style, intense bass drops, and impressive level of precision. His high energy performances never fail to bring the party to a peak.

His sounds might feature hip hop, rock, electronic, and even Top 40. No two sets are ever the same! 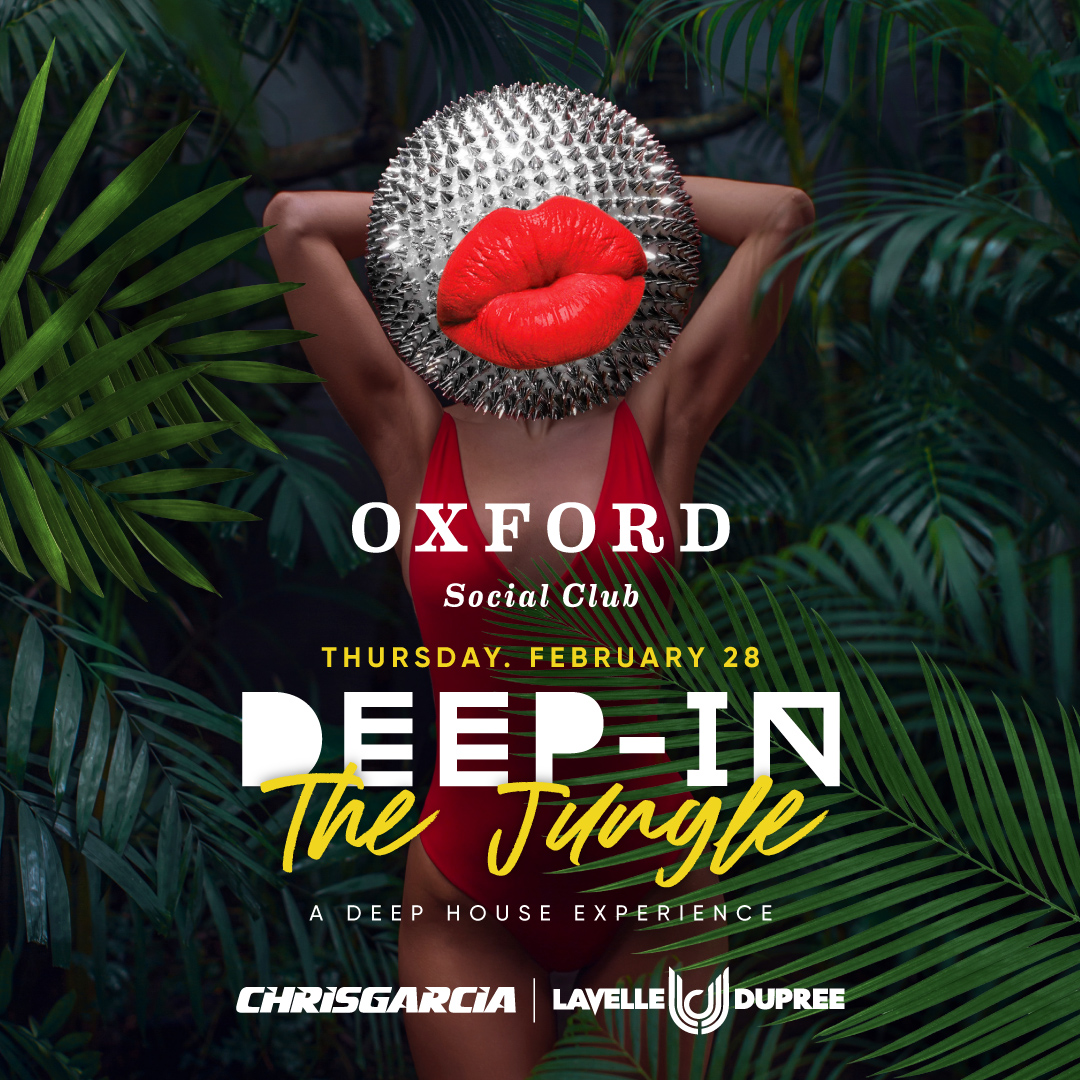 Feb 28: Deep In The Jungle: A Deep House Music Experience

Not familiar with Deep House music? Well, it’s a subset of house music, with origins in the 80s. Deep House is a style of house music featuring prominent jazz/funk/soul elements.  It’s also characterized by a specific tempo–usually between 100 and 125 BPM (beats per minute).

Deep House music creates an ambient vibe unlike any other, so you’ll love dancing the night away to these sweet beats.

Guest list and/or bottle service reservations are highly suggested for all of the events mentioned on this page. For more information or to make reservations, visit our Events Page. We hope to see you soon at our San Diego nightclub!

Conclusion: Oxford Social Club is one of the premier party destination in San Diego’s Gaslamp Quarter, and with good reason: our entertainment offerings are off the hook! We hope to see you soon at our San Diego nightclub!

Which San Diego February Events are you most excited about?